In recent years, there have been reports of a new class of regulatory peptides that are excreted from various organs and tissues [3]. Normally these compounds regulate physiological processes associated with protective functions and development of the body-reparative processes, cellular immune reactions, hematopoiesis. hemo coagulation, etc.

Maintaining the optimal regime of bioenergetic processes in hypoxia and ischemia is a crucial point of survival of cardiomyocytes in coronary heart disease and myocardial infarction. It can be assumed that the myocardium contains cellular regulators that can affect the rate of flow of enzymatic reactions and transmit the level of cardiomyocytes activity on the new economical consumption of oxygen. However, methodically, the selection and identification of these 1 regulators are carried out mainly by the method to find an errors. Specimen obtained by different methods, have different functional activity and spectrum of action.

In this article we studied the possibility of correction of cardiomyocyte bioenergy in hypoxia and ischemia by medicine isolated from the hearts by the method of V. G. Morozov and V. Kh. Khavinson [3].

The experiments were performed on 200 guinea pigs and 200 white rats of both sexes weighing 160-180 g. Acute myocardial ischemia was modeled by ligation of the left coronary artery. The drug of the heart (cordialis) introduced intraperritoneal at 1. 3 and 5 hours after coronary occlusion at a dose of 0.5 mg/kg. Rats were decapitated on 6 and 24 hours after surgery. The extracted heart was placed in the cold. After stopping the contractions, a transverse segment was cut from the middle third of the left ventricle and incubated in a solution of blue nitrate tetrazolium. to identify the necrosis zone. The material for the study of myocardium which is close to the infarct zone, was taken from the edge of the zone, painted in blue willow. The myocardial samples were fixed and poured into the Araldite according to the conventional scheme. On electron diffraction patterns at a magnification in 10 000 times the estimated coefficient of energy efficiency of mitochondria (CEEM), which represents the percentage ratio of product the average total number of Crist to the sum of the areas of the mitochondria in one spectrogram with pathology to those for normal hearts [4]. To estimated the degree of cell membranes damage part figuratively during fixation were incubated with colloidal lanthanum by the method [5]. The size of the myocardial infarction zone was determined gravimetrically [1]. Glycogen content in the myocardium Oprah was determinated by anthrone method, ATF and lactate in blood by machine «Boehringer», glucose by sets of «Bio-La-Test».
The hearts of guinea pigs weighing 180-220 g for retrograde perfusion according to Langedorf tiopentalom was removed under anesthesia (75 mg/kg). Firstly, pig has been introduced with 300 units of heparin.
Perfusion was carried out with a solution of thioyde whithout electro stimulation at a constant rate of passing speed of 10 ml/min, at a temperature of 30 °C and a constant saturation with сarbogen. The pH of the solution was adjusted to 7.4 by sodium bicarbonate. The experience scheme: 60 minutes of perfusion adaptation, 30 minutes of the total ischemia and 30 minutes of reperfusion. Cordialin has been added in a concentration of from 10-7 to 5×10-6 g/ml during for the experience. Upon completion of perfusion, the hearts were quickly cut and frozen in liquid nitrogen. The concentration of ATF, ADF, and AMF were determined spectrophotometrically using the «Boehringer» after extraction of nucleotides 6 % chloric acid from the fabric pounded in liquid nitrogen. The value of the energy potential was determined by the formula:
(ATF)+(ADF)/(ATF)+(ADF)+(AMF) [11] 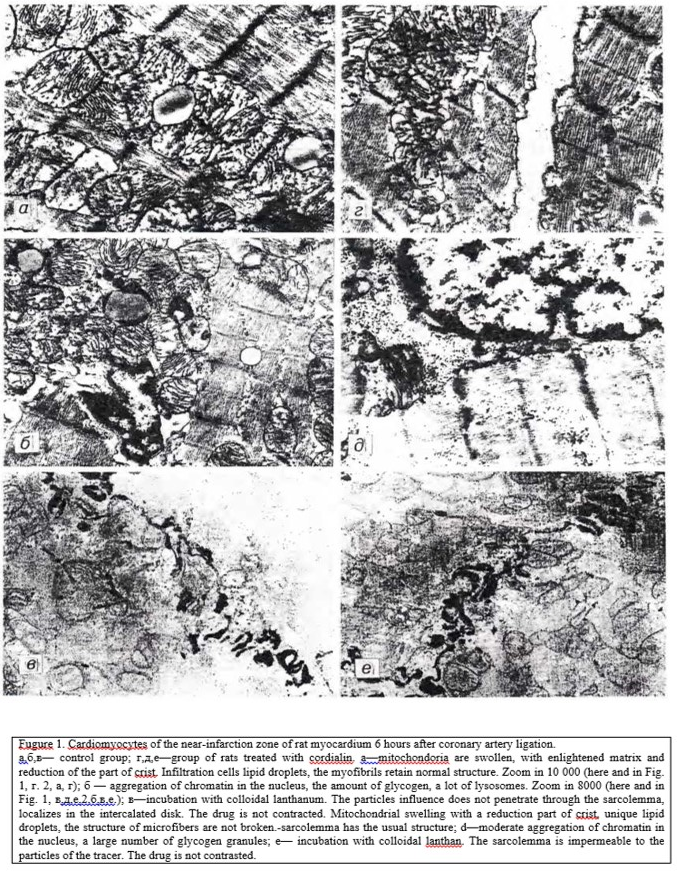 Cardiomyocytes were isolated by the method [12]. Oxygen consumption by isolated cardiomyocytes was recorded polarographically using a closed electrode Clark at 30’C in a medium containing: NaCl — 120 mol; KSI — 5,8 mmol; NaHCO3 — 4,3 mmol; K2HPO4 — 1,4 mmol; MgSO4 — 1,5 mmol; CaCl2— 0,003 mmol. The volume of the polarographic cell is 1 ml. The rate of consumption oxygen by cardiomyocytes was expressed in nanograms of AO2/min/mg of protein. The protein concentration was determined by the Lowry method [9]. Oxygenation of the suspension of cardiomyocytes was carried out by saturating with Carbogen for 1 to 3 hours at room temperature. 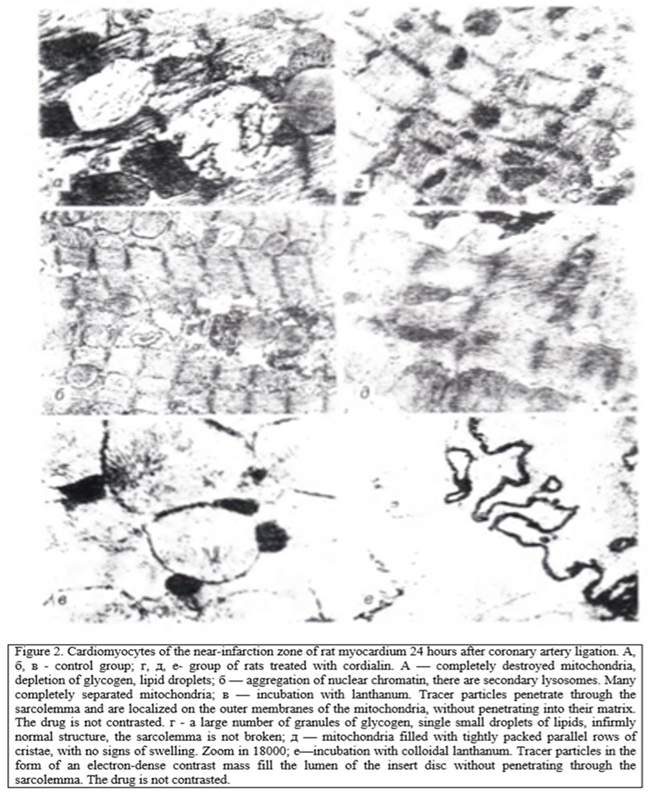 In the study of the near-infarction zone in rats, not treated, 6 h after coronary occlusion found damage affecting the mitochondria and nucleus. Multiple accumulation of lipid drops was noted. The most severe changes were observed after 24 h. In the myocardium of animals treated with cordialin, in the near-infarction zone at the same time there was a tendency to normalize the structure in sarcoplasm revealed a large number of glycogen granules, single lipid drops (Fig. 1, 2).

Analysis of the structure and function of mitochondria, conducted morphological methods Show that in animals, untreated, mitochondria looked swollen, with deployed crystals, the number of which is smaller as can be seen from the table 1, these changes led to the fall of CEEM, which, as a rule, is a harbinger of the transition of cells in the stages of irreversible changes. In rats after treatment with cordialin mitochondria although slightly swollen, kept densely packed parallel rows of clearly contoured crists.

The average number of mitochondria, the number of crists in one mitochondria and CEEM were significantly higher in the near-infarction zone in treated rats 4 hours after coronary occlusion (table. 1). These data allow to speak about its favorable effect cordialin on the state of bioenergetics of the myocardium in conditions of experimental coronary occlusion. 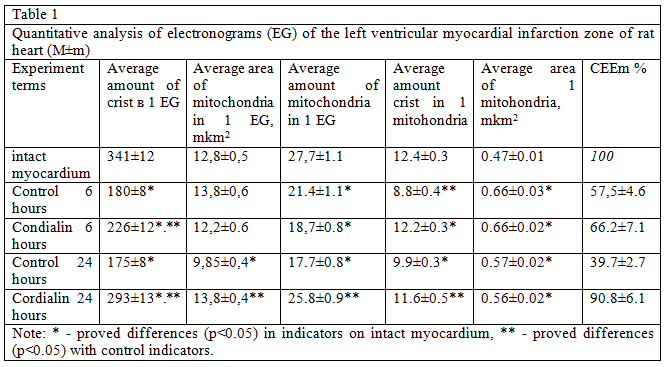 Confirmation of the above serve a higher content of ATF and glycogen in the myocardium of low concentrations of glucose and lactate in animals blood treated cordialin (table. 2).

These results indicate a decrease in the intensity of glycolysis in animals treated with cordialin and can help reduce acidosis of the myocardium in the ischemic zone. An increase in the ATF content in the heart muscle may indicate the transition of energy metabolism to a state of more economical consumption of energy substrates, which helps to maintain the viability and preservation of the intact sarcolemma of cardiomyocytes in the area with impaired blood flow.

Disorder of the integrity of the sarcolemmal membranes of cardiomyocytes of the myocardial infarction zone in rats of the control group was argued by the penetration of colloidal lanthan particles into the sarcoplasm. Particles of colloidal lanthanum, the size of which does not exceed 2 nm, remaining in the intercellular space in the normal or at the stage of reversible ischemia [6], penetrate into the sarcoplasm of cardiomyocytes at the stage of irreversible changes. The inner membranes of mitochondria and sarcoplasmic reticulum remain impervious to tracer particles. In the study of cardiomyocytes around the infarct zone of the myocardium of rats of the control group was observed in the arrangement of the particles of lanthanum in the sarcoplasm around the mitochondria and myofibrils (see Fig. 2). In the mitochondrial matrix, electron-dense homogeneous precipitation containing lipids were seen, which are considered as the equivalent of the transition of ischemic damage to cardiomyocytes to the stage of irreversibility [6].

Cardiomyocytes of rats treated with cordialin (see Fig. 2) had no signs of irreversible damage: colloidal lanthanum particles accumulated on the outer surface of the sarcolemma and in the insertion discs, without penetrating into the cell. The result of the effect of cordialin on the course of myocardial infarction was a slowdown in the rate of cell death in the ischemic area. The value of necrosis in the animals of the control group after 6 hours after coronary occlusion was 43.5±2.2 % and after 24 hours — 55.8±1.7% by weight of the left ventricle, and in animals receiving cordialin— respectively 37.4±1.9 and 50.0 rb 1.3 %.
Favorable action cordialin provided on the energy reserves of the myocardium in a series of experiments on isolated hearts of guinea pigs. The presence cordialin in perfusate contributed to the preservation of ATF in myocardium. Thus, prior to the reproduction of ischemia with subsequent reperfusion, the concentration of ATF in the heart muscle was 5.87±0.26 µmol/g of tissue, with reperfusion for half an hour after 30 minutes of total ischemia with cordialin — 4,10±0.67 µmol/g of tissue, and without the drug — 2.20±0.35 µmol/g of tissue, and the energy potential — 7.21, 5.77 and 3.30, respectively.

Cordialin a positive impact on the processes of oxidative phosphorylation has been demonstrated in suspensions of rat more than 7 times in relation to the endogenous cardiomyocytes under hypoxia. In cells, under hypoxia, reduced rate of endogenous respiration, approaching acute hypoxia to 0. Adding succinate to such cells causes an increase in speed of oxygen consumption and increased activity of succinate dehydrogenase. Such hyperactive oxidation of succinic acid is fraught not only with depletion of substrates, but also with further separation of oxidative phosphorylation [7, 10]. Limit piperaciline succinic acid becomes essential when the energy deficit that develops in tissues during deep hypoxia. Stimulation of acid consumption caused by the addition of succinate to the suspension of cardiomyocytes is considered an index of cell damage [8]

In the myocardium suffered by iscemia, and therefore in hypoxia, succinate monopo-analyzes the respiratory chain and is oxidized at higher speed than NADN2. It is well known that the oxidation of one molecule NADN2 Ng in the mitochondria provides the synthesis of three ATF molecules whereas oxidation of NAD-dependent substrates, which include succinate, allows synthesis of only two molecules of ATF so oxidation of NAD-dependent substrates is energetically more favorable.

It was found that the oxidation of the reduced NAD cardiomyocytes significantly increased when the incubation medium was present cordialin. It is known that in the cell there are 2 systems of oxidation of NADN2 — mitochondrial and microsomal [2]. Only the utilization of NADN in mitochondria provides ATF synthesis so it was very important to find out which of the two metabolic pathways of NADN oxidation activates cordialin. We found that cordialin stimulated NADN oxidation is almost completely suppressed by rotenone, which is a highly selective inhibitor of mitochondrial NADN2 dehydrogenase [2]. This suggests that cordialin selectively activates recycling recovered NAD in the mitochondria.

The obtained data indicate that cordialin selectively inhibits the oxidation of succinic acid, intensifies the oxidation of the energetically more favorable NADH2 substrate and thereby has a beneficial effect on energy metabolism, which is evidenced by an increase in the ATF content in the myocardium. Cordialin correction of bioenergetics of car — diomnocytes under hypoxia and ischemia prevents accumulation of lipid droplets in the cells of the near-infarction zone, which is a reflection of the high intensity of the processes of beta-oxidation of fatty acids, thereby eliminating the need for activation of glycolysis (confirmed by the high content of glycogen in the myocardium as a nogo, and quantitative nature and low concentrations of glucose and lactate in the blood and, consequently, prevent the consequences of acidosis.
Thus, the results of the studies explain the cardioprotective actions of peptide drug from the heart, to expressed in slowing the formation of zones of necrosis, the best condition cardiomyocyte near infarct zone after coronary occlusion; primarily due to the optimization of the process of oxidative phosphorylation in mitochondia.