The study of regulatory mechanisms of multicellular systems of the body is one of the main directions of modern biology and medicine. This makes it possible to study the mechanisms of cell differentiation, exchange and reproduction of genetic information and will develop fundamentally new approaches to the treatment of various human and animal diseases. Based on the analysis of the literature data and the results of our own research [6, 7] it was suggested that the system of biological regulators in the body, carrying out the transfer of specific information necessary for the normal functioning, development and interaction of cell populations (5, 6). Further the idea of a new class of information molecules — cytomedins- has been formed. It was found that the introduction of regulatory peptides (cytomedins) to animals and humans contributes significantly to the restoration of the specific function of organs and tissues in the case of their oppression in the pathological process or aging (1, 2, 3, 4). Regulatory peptides (RP) can mainly be used in the clinic for the treatment of diseases of those organs from which they are isolated. Thus, information about the properties of peptide bioregulators allows to start developing fundamentally new approaches to the treatment of various diseases of humans and animals, including profitability.

At the present time in connection with the prevalence of myocardial toxicokinetic and lack of pathogenetic treatment experiments were conducted for the correction of myocardial damage by industrial toxins, a peptide derived from the heart with the conditional. With this publication, we propose to open a series of reports on the analysis of different sides of cordialin action mechanism, as well as the study’s results of other new organotherapeutic drugs.

In the experiment were used outbred white rats weighing 180— 200 g. The pathological process in the myocardium was modeled on animals, poisoned with inflation methylene chloride (MH) at a concentration of 11512 mg/m3 or by intragastric administration of tetramethylthiuramdisuphide (TMTD) at a dose of 25 mg/kg in the oil solution. Peptide was injected intraperitoneally for 12 days at a dose of 1 mg/kg before (prevention) and after the 20-day seed poisons.

During the entire period of the experiment, the control over the condition of animals was carried out, the appearance, body weight were evaluated, a complex of laboratory studies were carried out, allowing to differentiate the main syndromes of the pathological process.

At the end of the experiment, control and experimental animals were clogged with simultaneous decapitation. Pieces of myocardium were fixed in 12% neutral Lily-buffered formalin.

Light microscopy of the preparations was performed after hematoxylin-eosin staining by Sudan III, IV, as well as by methods of van Gison, Selye, Weigert, Brachet, and Shabadash. For the morphometry of cardiomyocytes as a projection device, a luminescent microscope with a system of mirrors (vol.7x, about 90x), which allows to obtain an image of the cell nucleus, increased by 2500 times. Stereological analysis was carried out using a test system of short segments, with an increase of 1000 times. The values of surface volume ratios of tissue structures and vessels were calculated. Statistical analysis was performed using Student (t) test.

Histological study of the myocardium of the control animals showed a moderate blood supply to the myofibrils are clearly discernible; well identified striated and longitudinal striations.

Morphometric study of slices of the hearts of rats for 12 days peptide was only introduced, showed a slightly increased blood supply and increase of nuclei of cardiomyocytes in 1,2 times in comparison with intact animals. Just as in the control, muscle fibers were colored evenly, striated striations were clearly traced throughout the fiber. 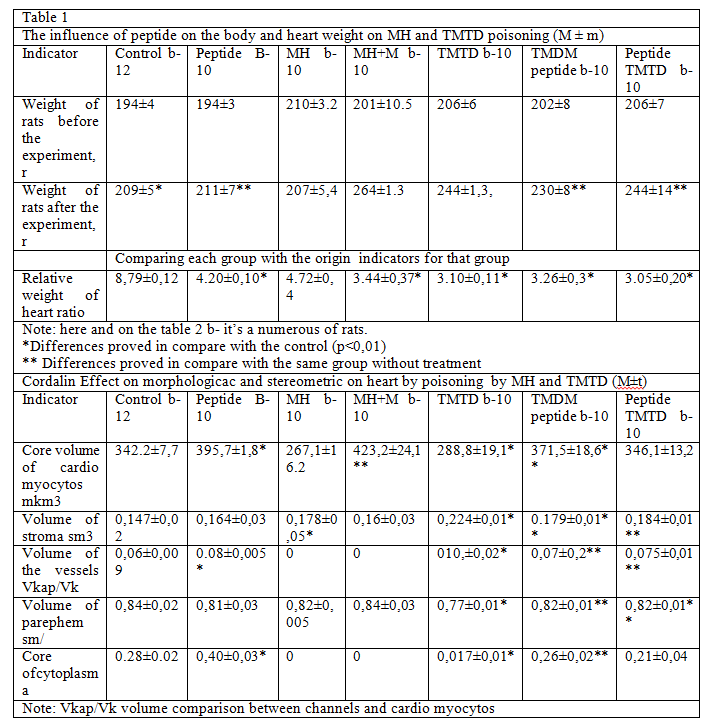 Poisoning with MH and TMTD caused a backlog of body weight of animals, minor changes in the morphological blood picture (decrease the number of formed elements and a slight decrease in hemoglobin levels). Against the background of uniform blood filling, muscle fibers underwent varying degrees of dystrophic changes, contained a small amount of fat inclusions, and some of them were in a state of lumpy decay. Often, the walls of the vessels looked thickened due to swelling of all layers. Probably, the exposure to these substances has led to the development of the myocardial vascular changes. The result of this could be uneven full blood, thickening or overflow of the lumen of the vessels.

Pattern of spastic contractions of the arterial wall was expressed in the swelling, desquamation of the endothelium, the location of it in the form of «paling», focal fuchsinophilia in the muscular layer of arterioles, the accumulation of glycosaminoglycans.

Degenerative changes of cardiomyocites probably could be associated with the disruption of the microcirculation in the myocardium due to uneven blood flow in the system of coronary arteries and arterioles of the heart, and venous congestion.

Along with indirect exposure, i.e. the creation of ischemic hypoxia, the possibility of direct influence on cardiomyocytes through the implementation of cytotoxic effect is not excluded. The volume of the nuclei was significantly decreased, with stereometric change in the volume ratio of the structures in the myocardium was observed a statistically significant increase in the stroma and a tendency to reduce the volume of the parenchyma.

Introduction to animals after priming MH and TMTD peptide significantly altered the extent of previously identified pathological changes. Muscle fibers were stained fairly evenly and intensively, basically no signs of dystrophy were detected, metabolic parameters in the myocardium significantly improved in the form of increased but uniform blood filling, a highly reliable increase in nuclear size (table. 2) without signs of pathology. Increased content of cytoplasmic RNA, the amount of glycogen. The volume ratio between the vessels, stroma and parenchyma has not sufficiently increased in the direction of increasing the volume of the parenchyma.

In the interstitial tissue were more frequent in small clusters lympho histiocytic elements. In animals who received peptide the clinical map was normalized faster: the weight of the growth of rats exceeded the weight of the control, they ate better, were more mobile; there was a tendency and normalization of clinical and biochemical blood parameters.

The results permitted to note a clear organotropy peptide. The evidence was parallel studies of other organs (liver, night, lungs, etc.) in these same animals, in which such a positive effect has not been detected. However, a certain dynamics in comparison with untreated animals in the direction of improving the morphological picture still took place, confirming the polymodality of the action of this RP.

On the course of poisoning, a positive effect was found in the group of animals, which peptide was administered as prophylactically, before the beginning of the priming in order to clarify the protective properties of this medicine. As shown by physiological and histological study, peptide leads to a decrease in the severity of the lesions: in this group of animals (tab. 1) the revealed morphological and morphometric changes testified to the improvement of structural and metabolic parameters in the myocardium and differed little from those in the control.

The studies allow to conclude not only about the organo specificity of peptides isolated from the heart, but also an effective protective action of peptide.

Thus, the presented materials indicate that the natural organopreparaty peptide stimulates the functional activity of cardiomyocytes and mobilization of their defense mechanisms against the damaging action of some industrial poisons. It is shown that peptide has a clear organotropic effect and that the treatment with this drug is promising, given its beneficial effect on the restoration of the function of damaged cardiomyocytes and the complete absence of toxicity of the drug.

We suppose that peptide medicines can be used for various kind of poisoning, including those caused by overdose of drugs that lead to heart damage. It can be used in the prevention and treatment of industrial poisonings poisons as effective components of pathogenetic therapy.