At the present time the study of the peptides’ properties [Dudgeon W. D. et others, 2016] has a high interest. Peptides have the same structure as proteins, but the size of these molecules is smaller. It is also important to note that short peptides, being a natural metabolic product present in the body, cannot be identified in blood or urine. In this case the study of the properties of individual structures on cell cultures can only be provided.

Peptide IPH- AVN contains a low molecular weight peptide, has angioprotective and vasoprotective properties and a normalizing effect on the vascular system.

Experimental studies have shown that the peptide IPH — AVN regulates metabolic processes in blood vessels, reduces the permeability of the vessel wall, increases the reserve capacity of the body, which suggests the effectiveness of the use of the peptide IPH — AVN for the normalization of the functions of the human vascular system according to various disorders.

Thus, the aim of the present research was to study angioprotective and other the peptide’s properties.

Clinical trials of the peptide IPH — AVN were conducted in 98 relatively healthy people of ages from 30 to 58 years old (mean age was 41.1±1.2 years).

To assess the effectiveness of the dose of 100 µg (n=98 people) for the studied peptides, we conducted studies on the efficacy of peptides at a dose of 50 µg (n= 95 people) and 150 µg (n=92 hours). The dose of 100 µg per day for peptides is chosen as used due to the fact that according to the research of «St. Petersburg Institute of Bioregulation and gerontology» the effective dosage begins with 100 µg, and the increase in the dosage does not affect the degree of effectiveness [Khavinson V. Kh., Linkova N. S., 2013].

Characteristics of the study

The IPH — AVN peptide was administered orally according to the following scheme: 1 capsule (100 µg peptide) 1 time per day during 30 days, then 30 days of rupture — and repetition of the same course for another 30 days, again after 30 days — and the third course for 30 days. The General course was 6 months (3 courses per 30 days and 3 breaks per 30 days).

We have carried out the assessment of peripheral circulation. To assess peripheral blood flow was used RHEOGRAPH «MITSAR — REO» (basic set) (Saint — Petersburg, techniques REG, EGR, TGR, IRHB / under WINDOWS-2000/XP). Regional blood flow was measured in parallel sections of the right and left thighs at the same time of day (in the morning at 9-11 o’clock).

The effectiveness of the improved management scheme for such patients with IPH-AGAA peptide was evaluated after 3 and 6 months. The initial data obtained before the study were selected for the control values.

Statistical analysis was carried out using the program STATISTICA 11.  In the basis of statistical data processing methods were based on the calculation of the average absolute and relative values with the calculation of mistakes average; estimation of significance of differences of the two aggregate functions with the use of Student’s  test (a difference was considered significant at t>2, p<0.05).

The results of the clinical study of the peptide IPH — AVN using showed that, after 3 months of this peptide using, peripheral blood circulation parameters, namely the rheographic parameter and the regional minute pulse volume of blood, significantly improved in humans.  These indicators prove the fact that the peptide IPH — AVN using leads to the optimization of vascular function and improvement of peripheral hemodynamic parameters (table 1). 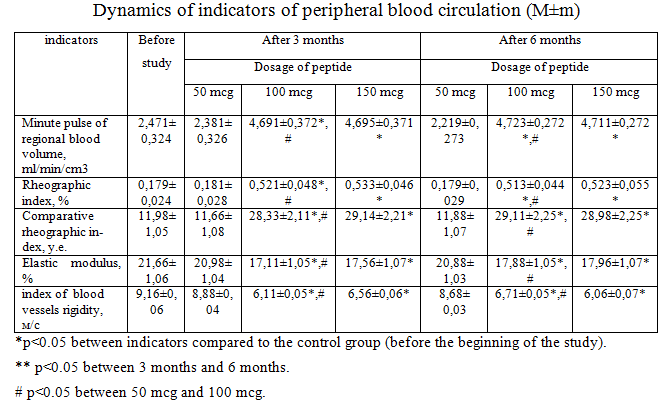 The elastic modulus decreased in 1.2 times after the peptide IPH – AVN usage. These data indicate the peptide IPH — AVN properties, manifested in the normalization and improvement of vascular tone.

The index of rigidity of vessels decreased in 1.5 times after the application of IPH — AVN peptide and reached an average value of the norm. This proves that the peptide IPH — AVN usage improves the elasticity of the vascular wall, leads to the optimization of the functional activity of the peripheral circulation system.

It should be noted that the most positive results in relation to the functional activity of the circulatory system were found after 3 months and did not change after 6 months of use of the peptide IPH-AGAA.

We have not found any significant differences between the parameters at 100 µg and 150 µg for all the studied parameters, which proves the fact that with an increase in the optimal dosage of the peptide used, the efficiency does not increase neither after 3 months nor after 6 months.

We also found no significant differences between the indicators in the application of 50 mcg and before the study on all the studied parameters, which proves the fact that the effective optimal dosage for peptides is 100 mcg.

Thus, the peptide IPH — AVN using leads to the optimization of vascular function and improvement of peripheral hemodynamics.

We also obtained data on the properties of the peptide IPH — AVN, manifested in the normalization and improvement of vascular tone.

The use of the peptide IPH — AVN improves the elasticity of the vascular wall, leads to the optimization of the functional activity of the circulatory system.

The use of peptide IPH-AGAA recommended in the form of biologically active food additives to improve the functional activity of the circulatory system, indicators of peripheral hemodynamics, microcirculation of blood.