At the present time the study of the peptides’ properties [Dudgeon W. D. et others, 2016] has a high interest. Peptides have the same structure as proteins, but the size of these molecules is smaller. It is also important to note that short peptides, being a natural metabolic product present in the body, cannot be identified in blood or urine. In this case the study of the properties of individual structures can only be provided on cell cultures.

Peptide IPH — AVN contains a low molecular weight peptide, has angioprotective and vasoprotective properties and has a normalizing effect on the vascular system.

Experimental studies have shown that the peptide IPH — AVN regulates metabolic processes in blood vessels, reduces the permeability of the vascular wall, increases the reserve capacity of the body, which allows to predict the effectiveness of the peptide IPH — AVN to normalize the functions of the human vascular system in violations of various origins.

Thus, the aim of the current study was to study angioprotective and other peptide’s properties.

Characteristics of the experiment

The most commonly used type of laboratory animals for the study of the properties of peptides, recommended by the Ministry of health of the Russian Federation in the Manual for preclinical studies of medicine [Mironov A. N., Bunatyan N. D. et al., 2012], are rats as the processes of pharmacokinetics are similar to those in humans.

To study the properties of the peptide IPH — AVN, we created a model of cervical trauma with vascular lesions. In order to cause muscle injury, we introduced the medicine Notexin into the quadriceps muscle of the left side of rats, and also applied salt solutions (ferric chloride) to create additional area of thrombosis. Notexin is a peptide of 119 amino acids from snake venom Notechis scutatus, with a molecular weight of 13574 Da. Soluble in water and salt solutions. It has a strong myotoxic activity.

We have studied 50 rats of the age of 14.3±1.1 month and weight 409,3±8.3 g, to which we have created the conditions of muscle injury with lesion of the vascular channel.

Daylight was 12 hours. As food for animals complete feed for rodents with additional feeding in the form of fruits and vegetables have been used. Water was used by animals independently from drinkers. Food and liquid were taken by animals ad libitum. Current cleaning of cells was carried out daily. General cleaning with disinfection of cells was performed weekly. All procedures of keeping animals, manipulations and testing of the obtained data were carried out in accordance with the standards ISO 10993-1-2003 and state standard RISO 10993.2-2006.

Rats were divided into 2 groups – control (n=20) and main (n=20). The rats in the main group were orally taking through a pipette dispenser, which allows to control the volume and the fact of liquid consumption, a medicine consisting of water for injection in a dosage of 1 ml, in which the lyophilized powder of IPH- AVN peptides in a concentration of 0.58 micrograms (µcg) per rat body weight per day (minimum dosage, in which there are signs of improvement in the indices of the long-term experience of the use of peptides), for 14 days. The medicine was administered per os directly into the oral cavity under supervision and tracking its ingestion.

After 14 days, the rats were killed, then removed the quadriceps muscle of the left limb, fixed by immersion in 4% paraphore maldegide in phosphate buffer (PBS pH = 7.3) for 24 hours at a temperature of 4 ° C.  Produced slices with a thickness of 20 µm using of cryotome of Leica CM 1510S model (Germany). The sections were then mounted on a slide and stained with hematoxilin and eosin.

For the study we used the microscope Olympus IX81. The microscope was equipped with a digital camera Olympus DP72 (Japan), connected to a personal computer. Photo and video recording of technological processes (experimental processes) with animals was not carried out in accordance with the principles of biomedical ethics and due to the lack of permission of the ethical Committee.

To evaluate the reliability of the difference in the results obtained in the groups before the medicine usage, compared with the groups after the using, the Dunnet criterion has been applied. If the data were normally distributed, the differences in means were determined by the Student test (t).

In the study of the capillary channel, we found that there were areas of necrotic endothelial cells, the accumulation of amyloid plaques in rats in the control group. All these morphological parameters indicate a sharp decrease in reparative capabilities within cells. Sites of necrotic endotheliocytes and accumulation of amyloid plaques in rats of the main group were found in 1.6 times less. These data confirm that the use of the peptide IPH — AVN promotes angiogenesis in case of damage to the vascular channel. 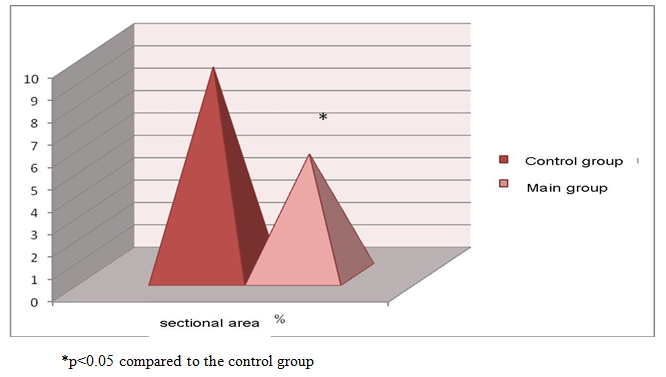 Thus, we found that in rats treated with the peptide IPH — AVN, the cross-sectional area of the arterial channel is in 1.8 times less than in rats of the control group. Given the sharp decrease in the reparative capabilities of epithelial cells, it can be concluded that such a decrease in the area of the arterial bed indicates a lower need for compensatory reactions, which are manifested by an increase in the cross-sectional area of blood vessels in case of damage and confirm the high reparative activity of the peptide IPH — AVN in relation to the ability to repair damage to the vascular wall.

Accordingly, the peptide IPH — AVN has angioprotective effect and increases the adaptive capacity of endothelial cells in rats with vascular channel damage according to experimental data.

Thus, the use of the peptide IPH — AVN promotes repair of the vascular channel after injury, reducing thrombosis on the basis of experimental model data.